The Role of Services in Economic Development

The Nobel-prize winning economist Nicholas Kaldor enumerated three highly influential “laws” of economic development in the 1960s, which we can paraphrase as follows:

Against this background, is it any wonder that manufacturing has long been seen as having a special role in economic growth and development? The link seems all the stronger when we link it to Baumol’s “cost disease” argument, namely that services sectors tend to see rising prices but little rise in productivity because of the tendency of wages to equalize across sectors.

In development strategies, as well as in some of the academic literature, special importance has therefore traditionally been given to the development of manufacturing in low- and middle-income economies. Indeed, some go further and argue that “premature deindustrialization”—the movement of resources out of manufacturing at too early a point in the development process—could have negative impacts on growth in the developing world (Rodrik, 2016). Since deindustrialization typically means the rise of services as opposed to industry, this point of view has overall become associated with what can be termed “services pessimism”—the idea that economies stand to lose it they specialize too early in services.

But there is much that this chalkboard model of developing economies leaves out. For one thing, services is a huge economic aggregate, accounting for a wide range of disparate activities. Home cleaning is a service, as is food preparation, but so too is doing research in a university, or providing engineering services for the development of a quantum computer. So the aggregate seems to run the gamut in terms of productivity, and may well do so in terms of other characteristics as well. Moreover, as befits the wide nature of the aggregate, it accounts for a substantial part of all economic activity around the world: Figure 1 shows that even in low-income countries, services account for around 40% of the economy, while in high income countries the figure is more like 70%. In general, the trend is increasing over time, particularly in the middle income countries. 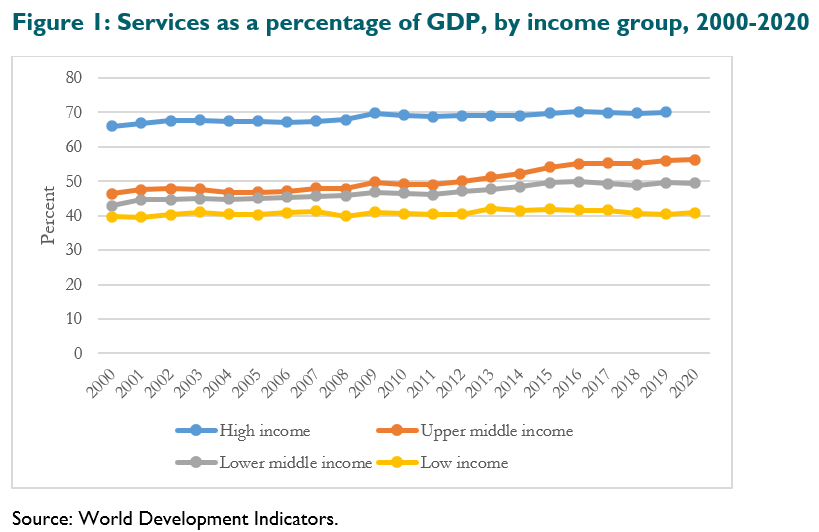 So how true can it be that specialization in services only has negative impacts on growth and development, if it implies a somewhat smaller manufacturing sector?

To answer this question, it helps to go behind Kaldor’s laws to look at the mechanisms that could be driving them. On the one hand, there is the capacity of manufacturing to generate spillovers and scale economies. Can services sectors do the same? Similarly, productivity growth in manufacturing is driven to some extent by the world market pressure imposed by the easy tradability of manufactured goods. How true is that dynamic for services?

When Kaldor was writing, services were often referred to as the “non-tradable” part of the economy. But since the inclusion of the General Agreement on Trade in Services (GATS) in World Trade Organization law, this classification no longer holds water. Literally any service can be traded under one of the four GATS “modes of supply”: pure cross-border provision using the internet; movement of the consumer; sales by a foreign affiliate; and temporary movement of the service provider. Using these classifications, research by WTO suggests that total world services trade may be relatively similar in total value to total world goods trade. So to the extent that trading on world markets can drive productivity growth, services markets are increasingly subject to this same pressure, although not to the same extent across all sub-sectors.

Similarly, there is also research showing that services firms can create positive economic spillovers for firms located nearby.

3       Reassessing the Role of Services in Economic Development

All of this new evidence has led economists, including at the Asian Development Bank and the World Bank, to reassess the potential role that services can play in promoting growth and development in low and middle income countries.

One key insight is that in the modern economy, manufacturing and services are intertwined in complex ways. In Global Value Chains, for examples, the end product is a mix of goods and services, and indeed much of the value in some industries comes from the latter. In the case of an iPhone, for instance, most of the incorporated value is related to design and intellectual property—both services—rather than manufactured inputs or assembly (Figure 2). Similarly, manufacturing firms employ increasingly large numbers of service-sector employees, ranging from cleaners to engineers and managers. So it is more and more difficult to dissociate the two sectors in the way the Kaldor approach implies. 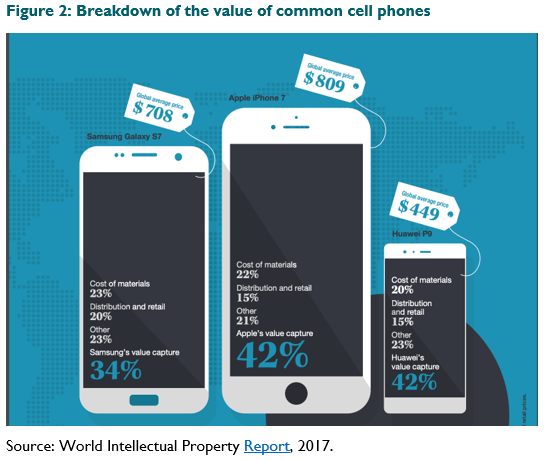 But an important nuance is that not all services are growth promoting. While industries like food service and personal services can create large numbers of jobs for low wage workers, they typically do not have the same capacity as some other services sub-sectors to raise economy-wide productivity growth. So patterns of specialization continue to matter, but in a narrower way than previously thought.

The bottom line is that country-level industrial policies increasingly need to incorporate a services perspective, and not focus exclusively on manufacturing. Policymakers, and those who support them, need to ensure a balanced and inclusive approach—all the more so since services has the capacity to be more welcoming to women workers than manufacturing has historically been in many parts of the world. A renewed focus on productivity growth in services as well as goods, combined with proper attention to the generation of good employment opportunities in both sectors, has the potential to reinvigorate development programs around the world.

You have already reported this .